12 Films for Christmas: How The Grinch Stole Christmas

It’s Day 2 of this wild ride towards Big J-Chrizzle’s 2020th, and today we’re looking back on the highest grossing film of 20 years ago: Ron Howard‘s How The Grinch Stole Christmas (or just The Grinch as it was first named when released in the UK).
For Day 1’s review of Happiest Season, click here.

Nobody has ever actively set out to make a bad film. well, maybe John Waters at a stretch, but apart from him, films are made mainly for one of two purposes: to create art, or to make money. Hey, it’s not the film “industry” for nothing.
In the case of How The Grinch Stole Christmas, the filmmakers – and Dr Seuss’s estate – would have been fools to think they were in for anything other than the big bucks. A beloved children’s story which had already been adapted into a classic TV special, The Grinch was ripe for the big-budget feature treatment.

With megastar Jim Carrey in the lead role, and bankable director Ron Howard helming the project, what could go wrong?

Well, for starters, the process to turn Carrey into Mr Grinch was so arduous, that he had to become, in his own words, a ‘zen master’ with the help of CIA torture endurance training to get through the 92 day shoot in the hot, heavy green costume. When combined with some apparently painfully uncomfortable yellow contact lenses, Carrey was, according to some crew interviews, particularly unpleasant to be around.
An Oscar win for makeup at the 2001 awards will no doubt have made the process a little worthwhile, but for audiences, the end process of bringing The Grinch to three dimensions served as little more than nightmare fuel. 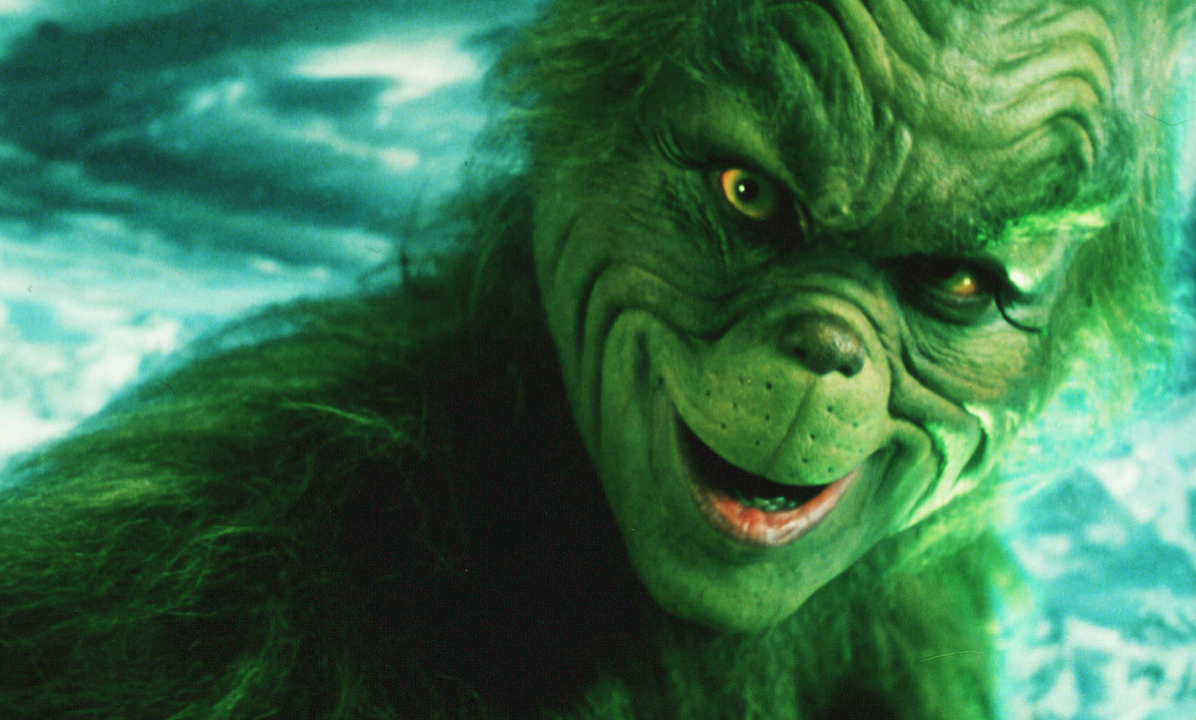 The second biggest issue for the film was its script. When adapting a 69-page story and a 25 minute TV cartoon into a near-two hour family tale, some embellishments to the story were always going to be necessary. Unfortunately, writers Jeffrey Price and Peter S. Seaman weren’t quite on the same form as when they wrote Who Framed Roger Rabbit?, and their take on Dr Seuss’s classic tale makes you feel every added plot point – The Grinch’s origin story, anyone? – with very little of the original story’s charm.

Not only does it drag, but How The Grinch Stole Christmas has a sense of humour rooted very much in the cynical style which the following year’s Shrek would establish as the paradigm for nearly all early 2000s family films. This snarky approach to Seuss can’t be blamed on Carrey, who has gone on record to declare his disappointment at not challenging the more bawdy comic elements – he insists all of his ad-libbed moments were family-friendly.

In fact, if it weren’t for Carrey, this film may not have enjoyed any of the adulation it’s received over the 20 years since its release, nor its comfortable position at the top of the 2000 global box office (it’s also still the 2nd highest-grossing Christmas film after Home Alone). His performance is that of a man at the top of his game, and while the working conditions may have been horrendous, and the script dreary, Carrey somehow managed to salvage a really committed, even fun to watch turn as the mean green antihero, from the creative mire surrounding the film. If nothing else, his improvisations gave us all the most relevant gif for these self-isolating times:

In an earlier article on this site about the big-screen Seuss adaptations, the word which was found to best sum up The Grinch was ‘dull’. On a visual and narrative level, Howard’s retelling feels a far cry from the whimsy and wonder that Theodore Geisel managed to inspire in a few drawings and some rhymed verse. During the film, Taylor Momsen‘s Cindy-Lou Who may have wondered aloud in song where she could find Christmas, but maybe everyone else should have been more pre-occupied in looking for the point to this overblown retelling.

One thought on “12 Films for Christmas: How The Grinch Stole Christmas”