Joker stands for nothing, and nothing is what it has to offer.

What drives a villain toward villainy? Can just one bad day too many be enough to lead someone down an inexorable path of depravity? Is it maybe an innate desire to create chaos where harmony reigns, or is it the product of an upbringing and a life inside a system which doesn’t care for anybody save a privileged few?
This last suggestion is the one put forward by the most recent attempt at offering a backstory to The Joker, one of the last century’s most iconic villains, in a feature-length reinterpretation of the Clown Prince of Crime’s origins by Todd Phillips: the director of Old School and The Hangover films.

Joker is a film which is part-character study, part-cautionary tale, with a soupçon of sixth-form level social commentary to top things off. The story follows Arthur Fleck, played by Joaquin Phoenix. Arthur is a man clinging to the fringes of his sanity as Gotham city around him drowns in a swamp of rubbish left uncollected due to a strike. He suffers a neurological condition which causes him to laugh uncontrollably when in awkward situations, and although he aspires to become a professional comic, he himself lacks any aptitude at making others laugh with him.
Things take a dramatic turn for Arthur, and before long he finds himself falling away from the quiet life with his mother, and into the madness waiting to engulf the city: a madness wearing a clown’s face. 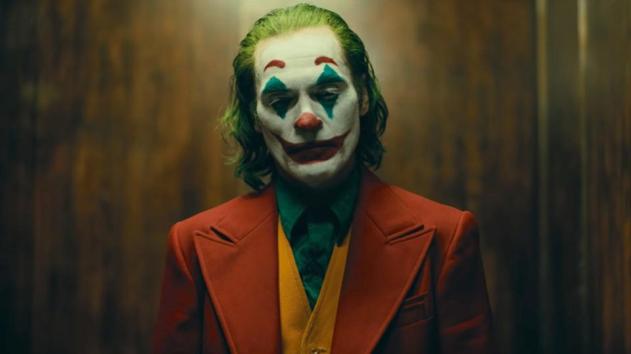 Before the film even came out, much was being made of what Joker was trying to say. Was it a rallying cry to the voiceless to take a stand against their perceived oppressors? Had Todd Phillips created a message film against the collapse of social care in a world where the rich only ever get richer and everyone else has to fight over what’s left? Or is the film nothing more than a soapbox for high-school level political grandstanding?
For all of the conjecture, Joker isn’t really about anything. Like the character says toward the film’s climax, he’s not political in any way: what he does is for his own merriment.

So if the film stands for nothing, what then does a film about one of comics and cinema’s greatest villains have to offer? Well, aside from maybe one or two genuinely shocking pieces of on-screen violence, the only worthwhile draw is Joaquin Phoenix’s performance. Phoenix is acting at full throttle here as the film’s protagonist, a man who finds himself with less and less to lose as the film progresses until the only thing that makes sense is to put on the paint, call himself Joker and introduce a little anarchy.
The Joker has proven a great role for actors to sink their teeth into over the years, and here is no exception. Phoenix has been better in other roles though, and his showy performance as Arthur Fleck barely papers over a script which is average at best. As mentioned before, there are moments when the film threatens to explode into something deeply unpleasant, but these scenes are so few and far between that, although effective, feel like they slipped through the net of a studio only willing to let the film go so far.

That said, it’s deeply impressive that a film like Joker made it out of a major studio in the shape it did. As Deadpool and Logan before it proved, there is an audience out there who want more mature studio superhero moves, and a grown-up film about The Joker could have said and done so much to meet that expectation whilst having something important to say. It’s a shame therefore, that Warners and DC decided that the director of The Hangover films was the right man for the job.

Then again, maybe that was the point.