Spider-Man: Far From Home shows the MCU can still be fun when it’s not doing a whole lot.

It’s impossible to talk about this film without spoiling Avengers: Endgame. For those still playing catch-up with these films, you have been warned.

How do you follow something as immense and as final as Avengers: Endgame? Marvel Studios have certainly felt the struggle before of delivering on the immediate follow-up to an Avengers film; something to which the makers of the much maligned Iron Man 3 can attest all too easily.

If any character can shoulder the pressure of following up Endgame though, it’s Spider-Man. He’s a near-universally beloved character, and this particular incarnation played by Tom Holland seems to have no shortage of cachet among audiences, after his appearances in the MCU crossover films and of course his own fun, if somewhat unremarkable solo outing back in 2017.
The challenge here for director Jon Watts and writers Chris McKenna and Erik Sommers was threefold: make a good Spider-Man movie, offer up a decent epilogue to Endgame, and leave some enticing hints to the future of the MCU. Just one of these requirements would have come with a mountain of pressure, so it’s fair to say that the onus was on Far From Home to deliver.
The stakes may be lower here than against Thanos, but the scale of this film certainly hasn’t diminished; while 2017’s Homecoming was very much based in Peter Parker’s own backyard – aside from a small Washington D.C. excursion – Far From Home goes, well, far from home: a high-school trip across Europe, to be exact. 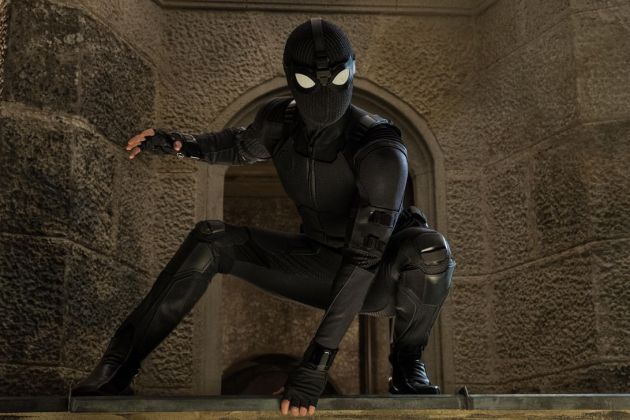 Yep, Marvel Studios and Sony have gone the Holiday On The Buses route and shipped all of its main characters off on a sunny adventure, while Peter Parker continues to cope with the loss of Tony Stark, and figure out his own place in a world of superheroes. Many commentators speculate he’s taking the reins of the Avengers, whatever that team is now that the main roster has disassembled, and Parker’s reliance on the Iron Spider suit seems to suggest that he’s more than following in Stark’s footsteps.
All Peter Parker wants though is to enjoy some time with his friend Ned, and finally win the affections of MJ, with the vacation to Europe proving the ultimate staging ground for a grand romantic gesture. Unfortunately, the universe has other plans for Spider-Man, and he’s quickly dragged into a plot involving a global threat, giant Elemental monsters, and Quentin Beck, aka Mysterio: a man with fascinating powers and a snazzy suit who claims to be from another Earth, and who appears to hold the key to holding back the aforementioned monsters. Plus, he seems to be soaking up the publicity from the news networks pretty well, so much so that Peter senses an opportunity to escape from the 24/7 hero duty, and to seize the chance to live a normal life for a moment.

Of course, it’s all too good to be true, otherwise this would be a very short film.

It speaks volumes about where superhero films are at the moment, where such an over the top camp comic-book villain like Mysterio can exist as a legitimate character in a major blockbuster. Not only that, but to have Jake Gyllenhaal, one of the finest actors currently in the business donning the fishbowl and cape for at least one of these films, is an absolute coup.
Admittedly I was worried to begin with when watching Gyllenhaal in Far From Home; his performance in the first act of the film feels a little stilted, but once his character gets some momentum going…well, let’s just say it makes his turn in Okja feel understated.
Tom Holland does another fine job as Spidey, and he will no doubt have been relishing the chance to get into the red and blue spandex all over again. The added dimension of mourning the loss suffered at the end of Endgame makes for some compelling quieter moments, and his chemistry with Zendaya’s MJ and Jacob Batalon as Ned is so strong that it’s easy to get along with this version of the character. 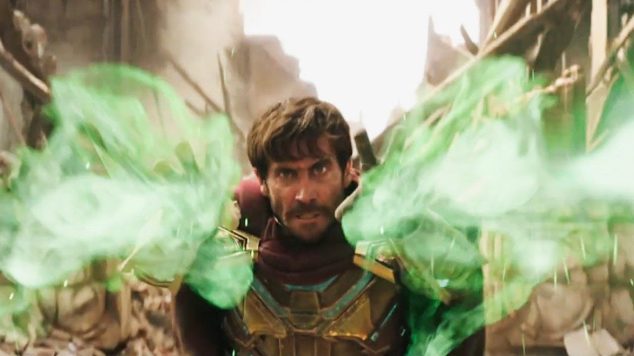 Honestly, it’s such a relief to have two really excellent central performances here in Holland and Gyllenhaal, because without those two, the film would have been an almighty slog. The set-pieces with the giant CGI monsters are fine but really not doing much in terms of spectacle, and there’s so much being set up in the first part of the film that it feels like it’s going on forever before the story really gets going.
For me, there was also an issue with the film feeling somewhat short on charm at points, which I suppose was always to be a risk when writing everything to be bigger than has come in the character’s previous solo outing. There are certainly funny moments, and I had a good time watching it, but the thrill perhaps didn’t stick around in the memory as much as I would have hoped for a Spider-Man film. I don’t know, maybe it’s just me.
That said, the two post-credit sequences inspired in me the loudest yells I have let out in an auditorium this side of Creed II, so that’s certainly saying something.

Spider-Man: Far From Home, in short, is good. It’s not great, but it satisfactorily works in all the ways I mentioned above: it serves as a decent follow-up to the universe shattering events that came before, whilst remaining a solid Spider-Man story with arguably the best villain featured in any of Spidey’s films to date. I’m including the brilliant version of Doctor Octopus from 2004’s Spider-Man 2 in this, and as a big fan of the Raimi films, that’s no faint praise.