Toy Story 4 gets extra existential, in a perfect ending for the series.

Well, I wasn’t expecting this.

When Toy Story 4 was announced, I was, like many people, deeply skeptical. The series had been rounded off perfectly with Toy Story 3, and with a few exceptions, Pixar’s output has struggled to reach the same heights of quality, so for them to go back to a story that was all but done felt like an unnecessary attempt to make a bit more money.

Once more details started to come out, and trailers started to drop for the film, my worry began to deepen, as Toy Story 4 looked increasingly like a sequel without merit, and after The Incredibles 2 left me numb after years of anticipation (admittedly I wasn’t as big a fan of The Incredibles as I am of Toy Story), my mental warning lights were flashing as I was more and more convinced that Pixar had finally messed up with a Toy Story film.

Oh me of little faith.

What was looking for all the world like a cynical reunion of childhood favourites for a throwaway adventure, might actually be my favourite of the Toy Story series overall. Like the preceding films, number four takes a simple concept and slyly throws in some very big ideas and questions, alongside great comedic set pieces and moments which reduced me to an emotional mess.
The story this time around catches up with the original toy gang still enjoying playtimes with new owner Bonnie, after Andy’s emotional farewell at the end of Toy Story 3. However, Bonnie is just about to start school and some of the OG toys are starting to feel a little out of favour when it comes to getting played with.
On returning from her first day of school, Woody, Buzz and the others discover that Bonnie has made a new friend – literally. 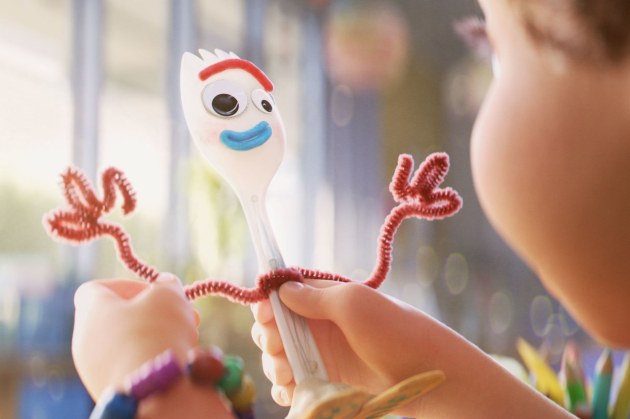 Enter Forky, a spork with pipe cleaner arms, googly eyes stuck on with glitter glue, and  lollipop stick legs. He wants nothing more than to return to the trash whence his materials came. Unfortunately, Bonnie has gotten awfully attached to this now alive abomination, and so Woody makes it his responsibility to ensure that Forky doesn’t dispose of himself, thus keeping his kid happy.
The very existence of Forky prompts some questions which had only been hinted at in this series previously: what makes these toys come alive? Why are they sentient in the first place? And what does it mean to be a toy, if something like Forky can exist on the same level as, say, Buzz Lightyear?

Toy Story 4 doesn’t look to answer these questions directly, but that doesn’t matter; what this is first and foremost is a bittersweet epilogue for characters which I, and so many others, have grown up with over multiple decades. Disney and Pixar could easily have drawn out further adventures for Woody, Buzz, Jessie and all the other toys to take part in, but this feels like a proper ending (so did 3, but this one more so). The fears which Woody had had in the first film, of being replaced by something new and unknown, have finally been realised in the shape of Forky, but where that anxiety of rejection made up the tension in the original Toy Story, now it’s a fact accepted by a toy who is now fully aware of his own, obsolete self. 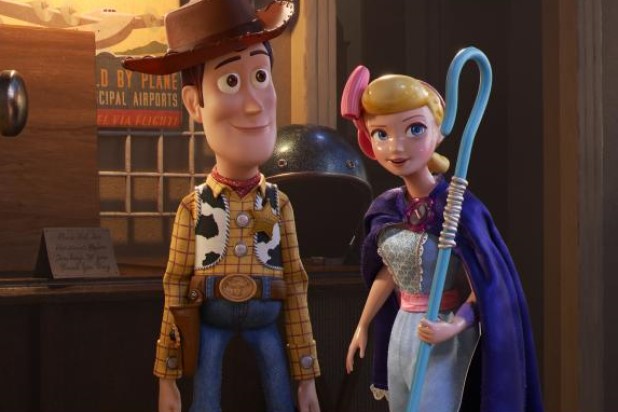 Woody’s acceptance of the inevitability of change is helped along by the return of Bo Peep, who has made her own voyage of self-discovery in the years since she was last present in the series. She no longer lives to fulfil the happiness of a child; life for her is what she makes it. It’s all a bit Westworld without the bloodshed or mature themes, and Bo is this universe’s U-rated Dolores.
It’s testament to Pixar’s level of storytelling, that all of this can be going on, and yet Toy Story 4 can still have room for memorable new characters. Jordan Peele and Keegan-Michael Key provide the film’s heaviest comic relief as carnival toys Ducky and Bunny, and Christina Hendricks provides the voice of the film’s antagonist, antique store dwelling Gabby Gabby. The writers have gone to a great deal of effort to make Gabby relatable, and her motivations are nothing short of tragic: she’s a toy that has never known the love of a child, and who yearns to be played with. It’s a stretch to consider her malicious at all, and while she surrounds herself with ventriloquist dummy henchmen and lives in a dusty, creepy antique store, she’s really not a villain in the traditional sense.

The emotional linchpin of the film though is in Tony Hale’s voice performance as Forky. Hale is the man of the moment when it comes to playing neurotic characters, and there’s nobody else better suited to capture the essence of a plastic spork which has no apparent right to sentience. What could have been a character which was quick to get on people’s nerves ends up being utterly endearing, and I defy anyone who doesn’t end up rooting for Forky before the film’s end.

There are so many more things I could talk about when I talk about Toy Story 4: about how stunning it is on a visual level, how every frame seems to pay some sort of fan service to Pixar’s back catalogue of films, and just how great it is to hear those actors doing those voices again, and with excellent material to boot. I haven’t even begun to discuss Keanu Reeves’ part as Duke Caboom: Canada’s greatest stuntman. Maybe I’ll save that for a later article.
What I will say though, is that the Toy Story films have all played an integral part of my own film watching. The first film is the first movie I ever saw in a cinema, way back in 1996, and Toy Story 3 came out the summer before I was to leave home for university; as far as timing goes, the third instalment’s release was brutally on point for me.

Now I’m a couple of years from 30, and very much unsure of my place in an increasingly complicated world, so hearing “You’ve Got a Friend In Me” one last time in a cinema brought me back tearfully to a more innocent time, while reassuring me that it’s okay to not know who I am or what I’m meant to be doing. This final trip with Woody – and I sincerely hope this is the last one – was a deeply personal experience for me, and while the film may not have worked for others in the same way, I’ll be surprised and delighted if there’s another film this year which manages to hit me as profoundly as this did.

It gives me no end of relief to say that for me, Toy Story 4 was the perfect postscript to a perfect series, and it’s reaffirmed my love for Pixar’s greatest stories. Trite as it might be to say, I know that I’ll be rewatching all four of these films, and loving each of them, to infinity and beyond.