LFF2018: The Hate U Give brings the Black Lives Matter movement to the big screen

The final film in my series on the 2018 London Film Festival takes a look at the tensions between the police and black communities in the USA – it’s The Hate U Give.

The majority of the films I’ve seen this London Film Festival have all had at their core, a message about the political landscape of the late 2010s. From Sorry to Bother You‘s bizarre, anarchic take on white privilege to Assassination Nation‘s attack on rape culture and the Patriarchy, there have been some very interesting films in the last couple of weeks of programming, all with their own styles and approaches.
The Hate U Give is probably the most direct message movie of the lot, tackling head-on the issues within an impoverished community of majority African-American people, and the institutional racism of the American police system.

Like with Assassination Nation, this is a film not interested in the political aspect, but made from an emotional perspective. As such, The Hate U Give has no intention or interest in considering a debate of two sides here; this film from the start wants its audience to know where it stands – that black lives matter – and that anyone arguing otherwise is rightly not deserving of any platform.
The straightforwardness with which The Hate U Give delivers its message is reflected in the film’s writing and visual style. There have been criticisms levied at the movie of it being like a TV movie in execution, and it’s true that there’s very little in the way of visual flair, but this minimalist approach allows the performances to shine through – and make the shocking moments even more distinct. The sequence that kickstarts the film’s main drama is tragically inevitable but still profoundly shocking after next to no buildup prior.

Events unfold and the drama builds from that point to a really impressive climax, as the film’s protagonist Starr – played here by Amandla Stenberg – realises she has to find her voice in the world and embrace her identity while surrounded by a tide of wealthy white schoolmates, and threats of gang violence at home. A more complex film might get lost in these subplots, but The Hate U Give keeps itself honest throughout, and so the revolving characters all play their part in bringing home that central message before the end.
Everything gravitates towards Starr though, and Stenberg has the thankless task of carrying the weight of the film’s argument while keeping everything from turning into a 2 hour soapbox about police brutality. Fortunately, she’s more than up to the task here and plays Starr with a great deal of humour and heartbreak in equal measure – she definitely feels like a real person going through a traumatic experience than a mouthpiece for the writer. 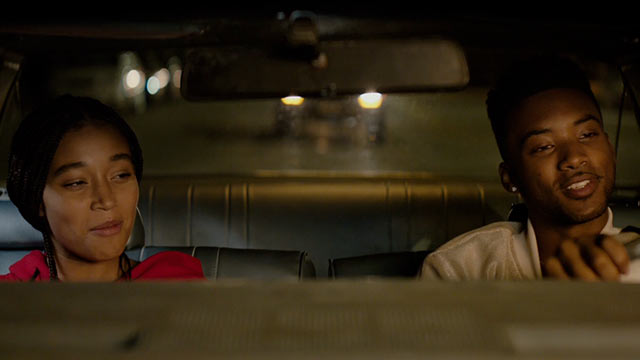 There’s a lot to like in The Hate U Give besides Stenberg’s performance and the film’s earnestness. If it can find an audience – and from the screening I was in it looks like the audience is there – then there’s a strong chance that this film will be getting talked about for a long while.