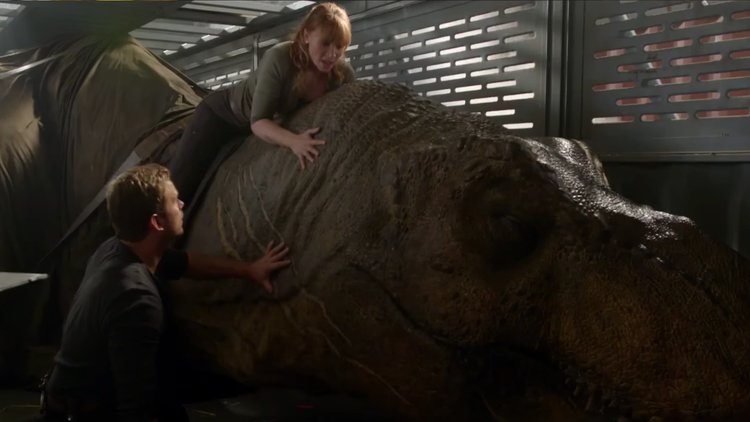 Back in 2015, when the world was simpler and less cynical, the Jurassic Park franchise returned to Isla Nublar after more than 20 years. Jurassic World was a really fun if flawed reboot/sequel that had huge box-office success and the franchise returned from extinction.

Of course a follow-up was inevitable and 3 years later, Jurassic World: Fallen Kingdom hits the screens with a new director in J.A. Bayona of The Orphanage, The Impossible and A Monster Calls fame. Chris Pratt and Bryce Dallas Howard are back too, to do their best.

For those who aren’t quite caught up, Jurassic World: Fallen Kingdom picks up a few years after the events of Jurassic World; the dinosaurs have completely taken over the island, despite the small matter of a once dormant volcano waking up and threatening to make the animals extinct…again.
A rescue mission is mounted to get as many dinos off Isla Nublar, and as it’s a Jurassic Park movie, of course not everyone involved in the rescue is doing so for noble motives.

After watching Fallen Kingdom, it’s clear where everyone involved was trying to take the overall story for the franchise (hint: look at the title) but the journey to get from dilapidated theme park to this movie’s climax is so messy and so so boring that it’s hard to care when the movie finally makes its final movement. What’s worse, Fallen Kingdom has a serious issue with throwing random elements into its story and expecting the audience to just go with it.
James Cromwell’s character is introduced almost as though he’s returning from a previous instalment – I Googled it, he isn’t – and twists arrive with no setup whatsoever (read: Maisie Lockwood). Even the big final sequence of the film happens with no real build-up, despite the enormity of its implications for the Jurassic movie universe. I admit I saw the movie after a mostly sleepless night but I certainly didn’t nod off at any point; these developments just appeared out of nowhere.

On the bright side, there are maybe a handful of moments in Fallen Kingdom that are wholly memorable for the right reasons: the opening submarine sequence, the moment with the brachiosaur at the docks and the bedroom scene all look like they came from much better Jurassic Park movies. Annoyingly the trailer ruins the latter of these moments, but it’s still an impressive moment of horror from a director well versed in the genre.
The performances are mostly believable too, but nobody really has much, if anything, to do here. Pratt and Howard’s chemistry is solid enough, Jeff Goldblum Jeff Goldblums for a few seconds of screen time (his whole role is in the trailer) and everybody else is just there. Overall it’s hard to pick out one notable performance, honestly the most engaging character throughout is probably Blue – the velociraptor.

Beyond that, there’s not a lot more worthwhile to say about Jurassic World: Fallen Kingdom. I could get into nitpicking territory, but honestly there are enough issues here to say that the movie just doesn’t work. It’s clearly the middle part of a trilogy, with almost no motivation for any of its characters and barely enough happening to fill its running time – which isn’t all that long compared to other blockbusters out at the moment. Jurassic World and the movies before it are far more entertaining and you’re better served revisiting those.

To put it more succinctly, as Dr Ian Malcolm once so eloquently declared:

One thought on “Jurassic World: Fallen Kindgom is left picking at the bones of a more interesting film”